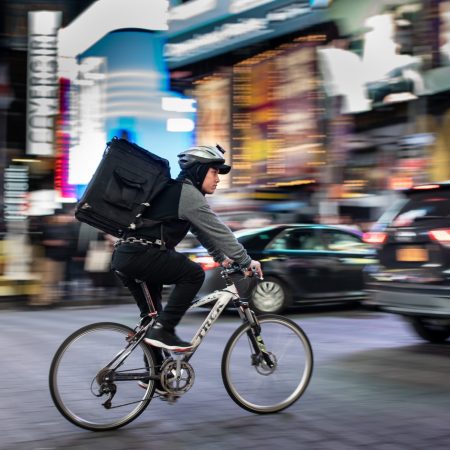 There continues to be much controversy in the employee versus independent contractor status confusion that app-based services have stirred up. However, at least for New York-based delivery workers of Postmates, Inc. (Postmates), a delivery company that services its customers through its smartphone app, the law has been made clear through the state’s highest court in a recent decision—In the Matter of the Claim of Luis Vega v. Postmates—that Postmates’s delivery workers are employees, not independent contractors.

Luis Vega was a delivery worker, or courier, employed by Postmates until he was terminated allegedly for negative feedback and fraudulent activity. After being terminated, Vega applied for unemployment insurance benefits. The Unemployment Insurance Appeals Board (the Board) had concluded that Vega was an employee of Postmates, making him eligible for unemployment benefits. However, Postmates appealed to the Appellate Division (Third Department) of the NYS Supreme Court, which determined Vega and other similarly situated couriers were independent contractors. On behalf of Vega and other couriers, the Commissioner of the NYS Department of Labor (Commissioner) appealed to the NYS Court of Appeals (Court), leading to this recent decision.

The Court held that the Board had relied on substantial evidence to support its conclusion that Postmates had sufficient control that it exercised over Vega and its other couriers. Postmates exercised significant control over the work of its couriers in a multitude of ways. Postmates itself connects its couriers to customers through its app-based digital platform. Though couriers can independently decide when to log into the app and accept delivery jobs, Postmates ultimately determines which couriers get assigned to certain delivery jobs through the app. Further, if the courier is unable to accept the job assigned by Postmates, the company itself finds a replacement to complete the job. The Court went on to state that even though couriers decide which routes to take to complete deliveries, Postmates tracks the courier’s routes on the app and provide customers their respective estimated delivery times.

With respect to compensation, couriers do not have the option to negotiate their pay. Rather, Postmates unilaterally sets the compensation rates for its couriers. Additionally, when customers do not pay, receive incorrect or damaged deliveries, and make complaints, Postmates—and not the couriers themselves—bears the burden and any losses. Lastly, Postmates sets the delivery fees, which customers pay through the app, going directly to Postmates.

Taken together—pricing and payment, matching couriers to customers for deliveries, providing the time frame for deliveries, and more—Postmates had dominance over more substantial aspects of the couriers’ work. In conclusion, the Court determined that Postmates exercised “complete control”, and not merely “incidental control”, over its couriers in the ways Postmates obtains customers through its app, directs which courier would complete which delivery (upon the courier’s acceptance of the job), and arranges couriers’ compensation methods and rates.

This decision now begs the question of whether other delivery workers and drivers of app-based delivery and car service companies, such as, but not limited to, Uber, Lyft, UberEats, DoorDash, GrubHub, could obtain status as employees in New York and thus become eligible for benefits they were not otherwise qualified to receive. This has been a matter of dispute over the years, but just last year, California passed legislation requiring app-based companies, including Uber and Lyft, to give employee status to their workers. Even more relevant to NYS employers is Governor Cuomo’s recent initiative through a task force to propose stronger regulations against misclassifying workers as independent contractors, which we reported on in our February 2020 newsletter. With this recent New York decision from the state’s highest court, along with Governor Cuomo’s task force at work, the independent contractor classification continues to erode.  This has been very evident during the COVID-19 crisis, where NYS was very quick to announce that independent contractors would be eligible to receive unemployment benefits.  It may not be long before most, if not all of NYS’s independent contractors, freelancers, and other gig economy workers obtain status as employees and the benefits that come with employee status.

For more questions or concerns on the classification of workers, please contact Chaim Book at cbook@mb-llp.com.